THE CURAÇAO BASEBALL WEEK HAS STARTED

Today is the official kick-off of the fourth edition of the Curaçao Baseball Week 2016. The initiators Blue Bay Curaçao Golf & Beach Resort, Hensley Meulens, Ben Thijssen and Jair Jurrjens are proud to the list with big names that will be present during the week. The Inspirational Charity Dinner takes place on Tuesday Night, invite only. Today, tomorrow, Wednesday and Thursday the kids will be on bat during the kids clinics. The week will end on the 2nd of December with a spectacular “Ball Park Night” in the Tio Daou Stadium in Sta Rosa.

“It all started in 2009 when we and Jair Jurjens started making plans to organize a baseball event which will take place every year on the Island. In the following years conversations started with Robert Eenhoorn, Hensley Meulens and Ben Thijssen. After the first edition we proposed a three years plan till 2016. This 2016 edition brings a lot of forces together, such as: the pro players and coaches of Curaçao, Febeko, KNBSB, MLB and for example ISG. For now the 2016 edition is the last one of the series. Our intention is to enlarge the CBW to become the biggest baseball event of the region. Of course this cannot be made possible without the support and trust of partners, sponsors and organizers. In the beginning of 2017 it will be clear in which way the CBW will keep their eventual continuity.’’ According to Rogier van der Meer, Commercial Director of Blue Bay Resort.

On Tuesday night the CBW organizes an exclusive ‘Inspirational Charity Auction Dinner’ for a good cause at the Sunset Bar & Grill. In a unique setting three speakers will tell their special life story to all guests. Speakers are: Churandy Martina, Didi Gregorius and Pernell Saturnino. Afterwards several auction items of the speakers will be auctioned for charity, the local baseball community.

Start of the Baseball Week

Vincent Zrour, Events Manager of the Blue Bay Resort: “A magnificent will start; the dreams of lots of natives will become real. With delight our resort has welcomed all the players and coaches today and we are going to make this week unforgettable”.

“Players such as Didi Gregorius, Jonathan Schoop, Jurickson Profar and other top players who will contribute this week, are examples for the kids of Curaçao. Present are: Didi Gregorius, Jonathan Schoop, Jurickson Profar, Sharlon Schoop, Ozhaino Albies, Kevin Kelly, Hainley Statia, Kevin Moesquit, Diegomar Markwell, Carlton Daal, Kalian Sams, Chris Garia, Sherman Lacrus, Juremi Profar, Denzel Richardson and Darren Seferina. We are proud to the fact that they put so much effort in this event, to make it a huge success”, according to Henlsey Meulens. Besides Meulens also Eugene Kingsale (KNBSB), Steve Janssen (KNBSB), Sidney de Jong (KNBSB), John Vodenlich (ISG) and Jerry Weinstein (Colorado Rockies) are present and guided the seminars for all local and internal coaches last weekend.

On Friday December 2nd a full Tio Daou stadium will be draught up for the Ball Park Night. An extraordinary night in which a lot of top player and coaches will be present to show their skills. Doors open at 16:00 and at 16:15 the first match of the night will start: the Senior League All Star Game. At 19:00 the Meet & Greet with all the players and coaches for the Premium ticket holders will start. After Kris Berry and Jean-Jacques Rojer have performed the national anthem, the softball game will start at 20:30: Team CBW vs. Team Curaçao Curaçao Celebrities. Celebrities of Curaçao in sports, music, arts, entertainment and veterans in the baseball and softball will make their appearance. Around 22:00 the spectacular Homerun Derby with a lot of big stars of the Island will start with a closing fireworks show. 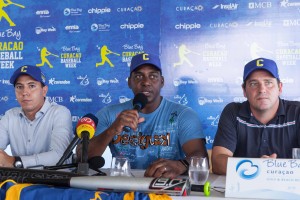 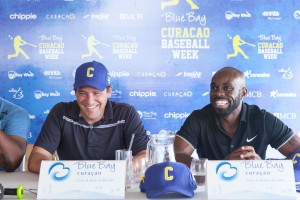