The Blue Bay Curaçao Baseball Week 2016 ended on Friday December 2nd with a spectacular Ball Park Night at the Tio Daou Stadium in Sta. Rosa. International players were present and the entire night was dedicated to baseball, entertainment and lots of kids activities. Besides all the honorary guests and different prize ceremonies, Kris Berry and Jean-Jacques Rojer sung the national anthem in a full stadium. The thrilling home run derby ended with a fireworks show.
Senior League All Star Game
The Ball Park Night started at 4pm with the Senior League All Star Game. The oldest talents from Curaçao got a chance to show off their baseball skills to the public. The match lasted for about 2,5 hours and during the match the stadium filled little by little. The final score was 1-0 for the All Star team of Quinay Virginie.
Meet & Greet
Before the celebrity softball game started, all the Premium ticketholders got a chance to meet their baseball heroes. Players such as: Meulens, Gregorius, Schoop, Profar and many others sat ready behind long tables on the field. Signatures, pictures and a personal meeting rewarded the long wait for the spectators. The rest of the public got a treat from a brass band, dance show of NJ Entertainment, music of Dj Carlito & MC Chris Strick, pyro acts and got a chance to receive many gifts the CBW mascot was handing out. St. Nicholas and his helpers came to gladden the audience and even showed his dancemoves!
Celebrity Softball Game
After the warm-ups and introduction of the CBW and Celebrity players, such as: Churandy Martina, Rafi Jozefa, Aida Juliana, Antonio Keller, Dibo Doran, Fichi Flemming, Pernell Saturnino, Curaçao artists Kris Berry and Jean-Jacques Rojer sung the national anthem on the pitching mount. Around 3.000 spectators witnessed this special performance and gave a warm applause as a result. After this special moment Miss Curaçao Universe Chanelle de Lau threw the first pitch to Miss Curaçao World Nashaira Balentien who was on bat. The three innings were interrupted by several special ceremonies on the pitching mount. First Team Kingdom Of The Netherlands player Hainley Statia officially retired as baseball player and was handed a framed jersey of the Kingdom Team by the KNBSB. Thanks to Rogier v.d. Meer, Blue Bay Chief Smile Officer Churandy Martina was in the spotlight after the second inning. Finally the 12 kids who won during the Kids Clinics received their price from Hensley Meulens and Vincent Zrour: a trip with one parent to a Miami Marlins MLB game, including a weekend stay and an Insel Air round trip in 2017.
Homerun Derby
Around 22:45 the six homerun derby names were announced. Kalian Sams (winner 2015), Sharlon Schoop (winner 2013), Jonathan Schoop (runner-up 2013), Jurickson Profar, Juremi Profar en Denzel Richardson (SXM). The final between Juremi and Denzel was thrilling. In the final round Profar hit 2 homeruns out of 3 turns, compared to the 1 out of 3 from Richardson. Profar won the CBW 2016 homerun derby and no one other than SFG hitting coach and co-organizer, Sir Hensley ‘Bam Bam’ Meulens handed out the trophy.
After the splendid fireworks show, all the spectators were tired, but left home fulfilled. How and in which way the Curaçao Baseball Week will eventually continue is not determined yet. In the beginning of 2017 Blue Bay Curaçao will make an official announcement about the future of this event. Check the complete atmosphere impression on: http://curacaobaseballweek.com & www.facebook.com/curacaobaseballweek. 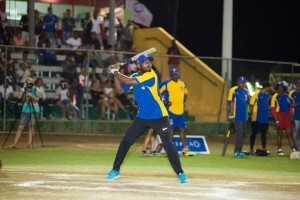 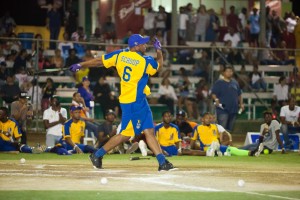 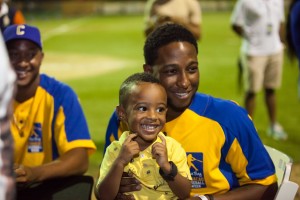